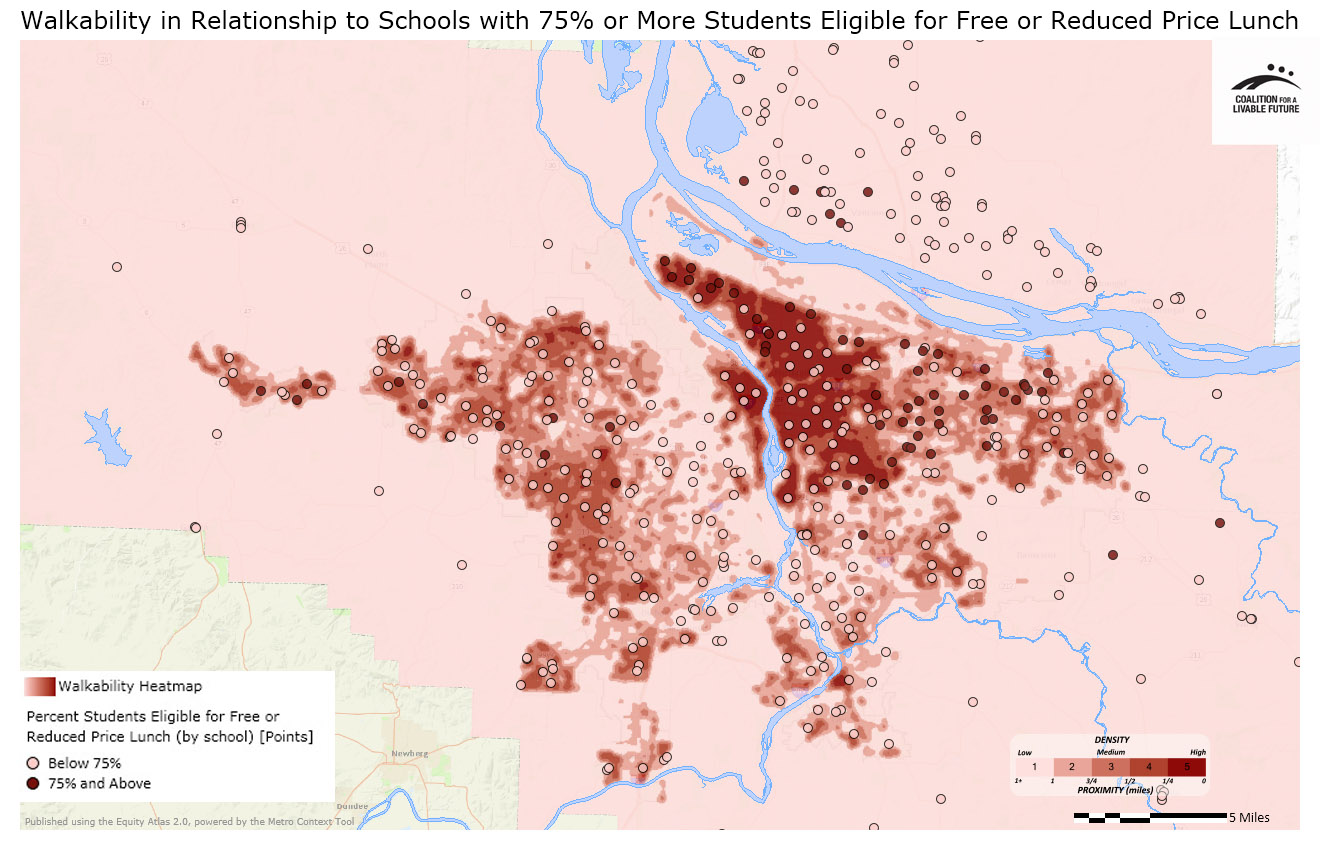 Walkability in Relationship to Percent Minority Students by School

Note: The walkability maps do not include data for Clark County, so this analysis is limited to the Oregon portion of the four-county region.

In neighborhoods with streets that have limited vehicle traffic and low vehicle speeds, walking may be relatively safe and easy for most residents even without sidewalks. In those communities, increasing sidewalk coverage may not be viewed as a high priority. With limited resources, it makes sense to prioritize investments in neighborhoods where sidewalks are essential for pedestrian safety. But it is also important to note that even in neighborhoods where sidewalks may be seen as a lower priority, they are a critical resource for people with disabilities, children, and others for whom walking in the street is not a viable option.

The Walkability-Sidewalk Density map highlights several areas of the region with high levels of sidewalk coverage. The largest areas with consistently high sidewalk densities (i.e. the darker brown areas of the map) include most of the older neighborhoods in the city of Portland west of I-205 as well as specific sections of many of the region’s other cities, including the cities’ central business districts as well as older, more urbanized neighborhoods. The densities are particularly high – meaning the most complete sidewalk coverage across the entire city boundaries -- in King City, Johnson City, Beaverton, Cornelius, Tigard, and Gresham.

The Walkability in Relationship to Schools with 75% of More of Students Eligible for Free and Reduced Price Lunch map indicates that the areas with the most complete sidewalk coverage include a mix of both high-poverty and low-poverty schools. In the city of Portland, in the neighborhoods with the densest sidewalk coverage, the schools located closest to downtown tend to have lower poverty levels whereas the schools further north and east of downtown tend to have higher poverty levels. Sidewalk coverage becomes less dense towards outer east Portland, and the schools in those areas are predominately high poverty.

Outside of Portland, most of the high poverty schools in the more densely populated areas of east Multnomah County, Washington County, and Clackamas County are located in areas with sidewalk coverage that is reasonably good, though not as good as in Portland’s close-in neighborhoods. However, there are four high poverty schools in Clackamas County that are in areas with low levels of sidewalk coverage. These schools are Naas Elementary in Boring, and Cottrell Elementary east of Boring, Lee Elementary in Canby, and Welches Middle School in Welches.

The patterns in these maps suggest that, at a regional level, the presence of sidewalks is largely determined by factors such as neighborhood age, level of urbanization, and the local jurisdiction’s historic approach to planning. Because of the complexity of these factors, the relationship between sidewalk access and population demographics is not uniform across the region. While some neighborhoods with above average percentages of populations of color and/or populations in poverty have good sidewalk coverage, many such neighborhoods do not have adequate sidewalk coverage. In locations where lack of sidewalks significantly impacts neighborhood safety and walkability, these disparities are cause for concern. For example, the Walkability-Sidewalk Density map highlights several areas in outer east Portland and Gresham with poor sidewalk coverage along busy roads near schools with high percentages of students in poverty and students of color. The Atlas maps offer useful data for identifying neighborhoods like these that would benefit most from targeted investments in sidewalks.

This map shows the density of sidewalk coverage as a measure of the walkability of a particular area. It is based on a 1/4 mile radius, which is generally accepted as a reasonable walking distance. Unfortunately, good data on sidewalk coverage are not available for Clark County, so the map only includes meaningful data for the Oregon portion of the region.

This map uses the same underlying data as the Walkability-Sidewalk Density map. Instead of showing the data as a heatmap, it aggregates the data by neighborhood-level geography.

Walkability in Relationship to Percent Minority Students by School

This map layers the Percent Minority Students by School point layer on top of the Walkability-Sidewalk Density map.

This map layers the Percent Students Eligible for Free and Reduced Price Lunch by school point layer on top of the Walkability-Sidewalk Density map.

To go back to the Transportation Series page, click here