The original Atlas, published in 2007, documented a dramatic shift in the distribution of populations of color and low-income residents across the Portland metro region from 1990 to 2000, with increasing percentages of these populations moving away from the region’s urban core to suburban and outlying neighborhoods. The Atlas attributed this shift to rising housing costs in the central city that involuntarily forced renters to seek more affordable housing in neighborhoods further away from downtown. In addition, many minority homeowners moved out as housing prices rose and the central city became less diverse. As the Atlas noted, “The social cost of such displacement is high. Living in one neighborhood for extended periods of time facilitates the development of family social networks. Residential stability is key to success in several areas of life, including school performance, job tenure and health ... Residential displacement can take on particularly painful aspects when entire, long-standing communities are disrupted.” 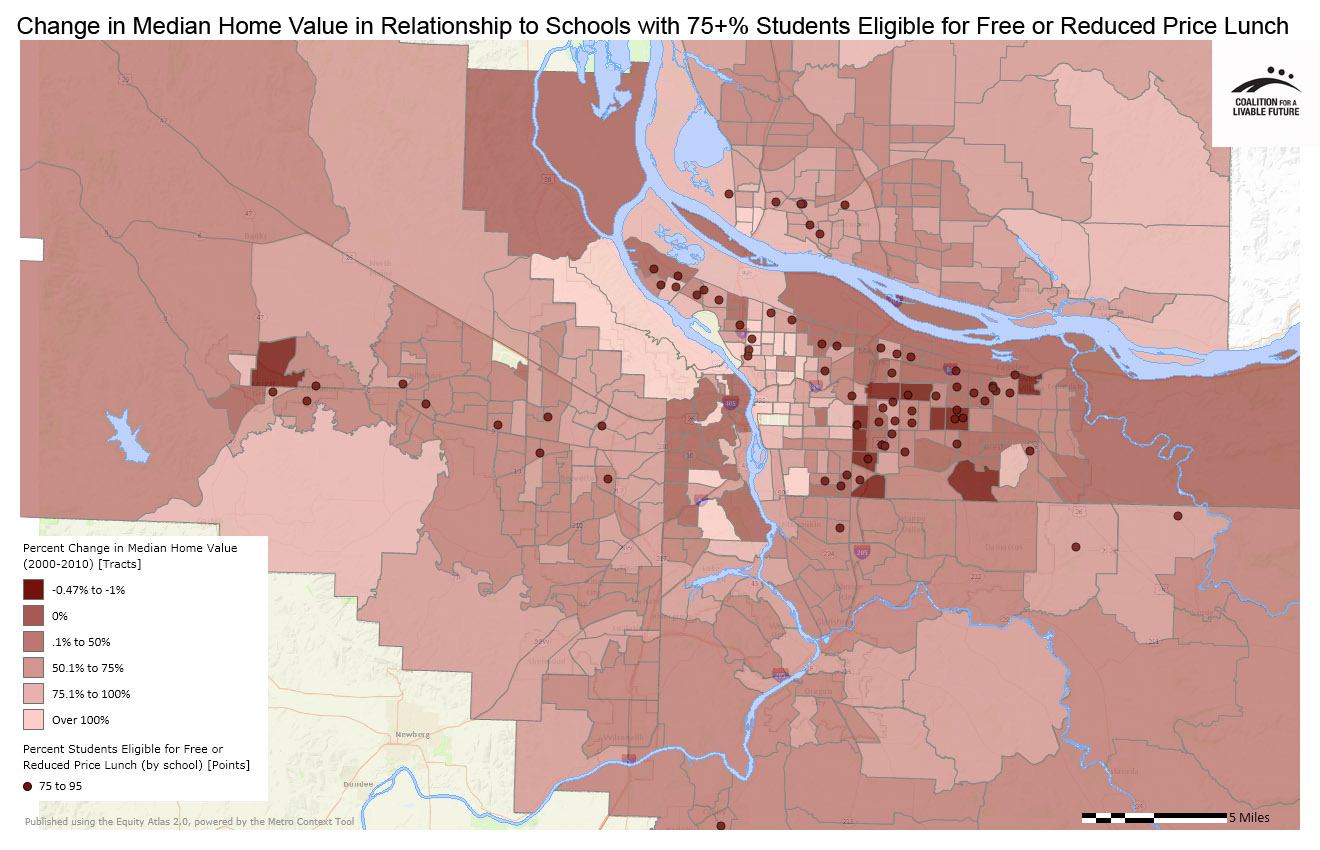 Only a handful of census tracts had lower inflation-adjusted housing values in 2010 than in 2000. These census tracts are located in outer east Portland, Gresham, Wood Village and Fairview on the east and Forest Grove on the west.

These data do not fully capture the volatility of housing prices over the past decade. Prices rose rapidly in the early part of the decade and then dropped toward the latter part of the decade. Prices are now beginning to gradually increase again. The map compares sales price data on homes sold in the year 2000 and 2010, so it reflects two snapshots in time rather than the trends over the course of the entire decade.

The Percent Change in Populations of Color (2000-2010) map shows how the geographic distribution of populations of color in the region has shifted over the past decade. From 2000 to 2010, the share of the population who were people of color decreased in inner northeast and southeast Portland census tracts, with the largest decreases occurring in inner northeast Portland. Several census tracts in far western unincorporated Washington County and far eastern Clackamas County, beyond the Urban Growth Boundary, also show decreases in the share of populations of color. Increases occurred in inner suburban cities and adjacent Portland neighborhoods and in nearly all of Clark County.

The effects of the recent recession can be seen in the map Percent Change in Median Income (2000 to 2006-2010 estimate). The majority of the census tracts show either modest gains in median income (up to 20%) or decreases (up to -55.49%) during the last decade.

In Washington County, median incomes declined in most census tracts in the cities of Beaverton, Hillsboro, Tigard, Cornelius, Banks and North Plains, but a few census tracts in unincorporated areas showed steady or increasing incomes.

In the region, only five census tracts show places where median income increased dramatically, from 50% to nearly 200%. They include the neighborhoods of Cedar Hills/Cedar Mills and Bull Mountain in Washington County, Esther Short in Clark County, and the Pearl District and the northern part of the Eliot neighborhood in Multnomah County.

The Percent Change in Median Home Value in Relationship to Schools with 75% or More of Students Eligible for Free or Reduced Price Lunch map explores the relationship between changing median home values over the past decade and current-day school poverty rates (as a proxy for neighborhood poverty). For most of the region, the map does not show any consistent over-arching patterns. The exception is Multnomah County, where there appears to be a fairly consistent alignment between schools with high shares of students who qualify for free or reduced price lunch and census tracts with decreasing or only slightly increasing housing values. It is not clear whether the absence of a similar pattern in the other counties is due to an actual lack of a correlation or because of the inherent weakness of using school poverty data as a proxy for neighborhood poverty.

The first three maps in this series are consistent with the narrative of continued displacement of low-income residents and communities of color from inner Portland neighborhoods and select urban areas in 2000-2010. But, in contrast to the prior decade, these patterns are set against the backdrop of an economic recession that affected most areas of the region. The patterns in the maps suggest the need for continued attention to the dynamics of gentrification and displacement and their effect on equity in the region.

This map layers the Percent Students Eligible for Free or Reduced Price Lunch by school point layer on top of the Percent Change in Median Home Value map.

Data Source: Oregon Department of Education & Washington Office of the Superintendent of Public Instruction (2011-2012); Tax assessor data on homes sold in 2000 and 2010, from Metro RLIS and Clark County GIS