Parks and natural areas play an important role in people’s health and well-being and the overall livability of our communities. Parks provide opportunities for leisure activities and serve as informal gathering places for building community. Along with these obvious benefits, research has shown that access to parks and nature provides measurable health benefits. Access to nature is restorative, reducing blood pressure and stress levels. By providing opportunities for physical activity and recreation, parks and natural areas also provide opportunities for improved health through increased physical activity, reducing the risks of obesity, cardiovascular disease, diabetes, and a range of other diseases.

The Atlas defines “publicly accessible” parks and natural areas as those which are freely open to public use without restrictions, regardless of whether they are publicly or privately owned. Greenspaces that are available to the public on a more limited basis, such as school sports fields, are defined as “Greenspaces with Limited Public Access” and are included in the Access to Greenspace and Outdoor Recreation map series. 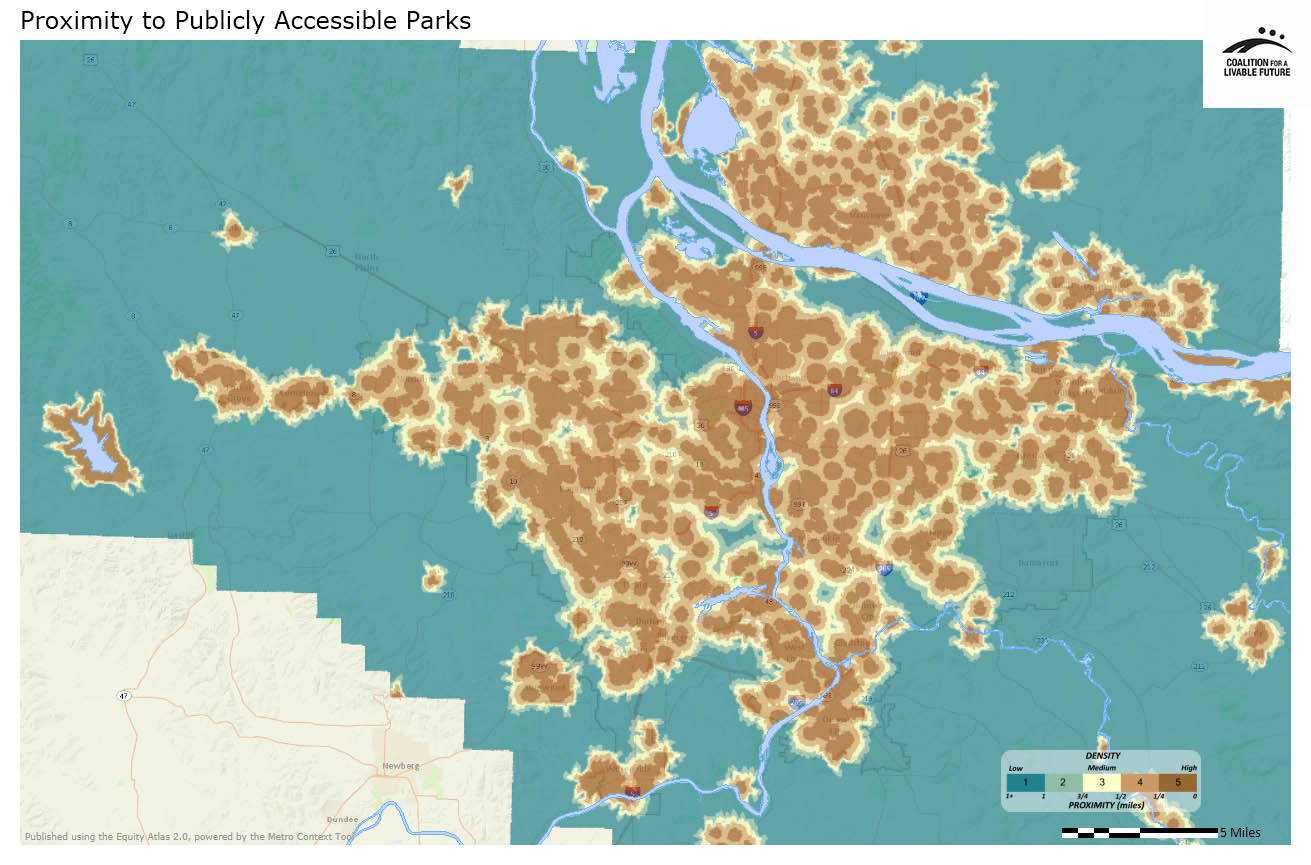 The Proximity to Publicly Accessible Parks map indicates that park-rich neighborhoods are distributed throughout the region, particularly in urban areas. Twelve neighborhoods earned a proximity score of “5”, indicating that virtually every location in the neighborhood is within ¼ mile of a publicly accessible park. Half of those neighborhoods are located within Portland city limits:

The Atlas mapping tool’s proximity scores enable us to easily compare neighborhoods (or cities, counties, or census tracts) to one another. However, it is important to note that when we analyze equitable access to parks, what we really care about is whether people – including specific populations such as youth, populations of color, or low-income populations – live in proximity to a park. The Proximity to Publicly Accessible Parks in Relationship to Areas with Above Regional Average Percent Youth (Ages 0-17) map highlights young people’s access to parks because children and youth are key users of park facilities. This map reveals that among the twelve neighborhoods listed above, only three - Hazelwood/Mill Park in Portland, and Airport Green and Northcrest in Vancouver – are located in census tracts with youth populations above the regional average of 23.68%. Many of Portland’s park-heavy neighborhoods lie in more densely urbanized areas, whereas the census tracts with youth populations above the regional average exist mainly in suburban areas on the periphery of the region. The areas with the greatest overlap between high youth populations and high proximity to parks are located in more developed suburbs and close-in cities like Gresham, Vancouver and West Linn.

Fourteen neighborhoods earned less than a 1.25 on the proximity to publicly accessible parks index. Many of these neighborhoods are in large industrial areas or rural areas with low-density residential populations:

Many of these neighborhoods overlap with census tracts that have above the regional average percentages of youth. This includes portions of Damascus, Caufield, Aurora-Buttevile-Barlow in Clackamas County; portions of Ridgefield Junction in Clark County; and all of Fern Prairie, Proebstel, Meadow Glade, East Fork Frontier and Hockinson in Clark County.

The clear mismatch between the locations of park-rich neighborhoods and the areas of the region with the highest percentages of youth raises important questions that can help to inform future planning. Additional research will be needed to further understand the demographics, population densities, and availability of other forms of outdoor recreation in each of these neighborhoods to help prioritize where additional parks are most needed.

The Proximity to Publicly Accessible Natural Areas map highlights the high levels of access to natural areas in rural parts of the region located outside of defined neighborhood geographies, particularly in eastern Multnomah and Clackamas counties and western Washington County. While it is not surprising that unincorporated parts of the region close to protected forest lands and natural attractions such as Mount Hood show up on this map, ten more urbanized neighborhoods also earned a high score of ‘5” on this indicator:

As could be expected, many of the neighborhoods that have high scores on the Proximity to Publicly Accessible Parks and Natural Areas Composite map are the same neighborhoods that scored well on the individual parks and natural areas maps. Interestingly, nine out of the top twelve high scoring neighborhoods in this composite index are located in a cluster of cities along the Willamette in Clackamas County – Lake Oswego, West Linn and Oregon City:

The above analysis provides some initial insights into potential disparities in access to parks and natural areas across the region, but it only represents a starting point for further investigation. In order to more fully understand this issue from an equity perspective, additional research will be necessary in order to assess how proximity to parks and natural areas varies by population density and for specific demographic groups. The Proximity to Greenspace and Outdoor Recreation in Relationship to Demographic Patterns map series offers a preliminary analysis of potential disparities. The Atlas mapping tool and the data underlying the Atlas maps can be used to inform additional analysis.

The Publicly Accessible Parks map shows proximity to parks that are open to public use, regardless of whether they are publicly owned. Parks are defined as active or passive recreation areas where facilities exist that are primarily intended for recreational uses by the public. Proximity is measured based on street grid access to park entrances.

The Publicly Accessible Natural Areas map shows proximity to natural areas managed primarily for the value of natural resources, the use of environmental buffers, conservation and/or habitat protection. Proximity is measured based on street grid access to park entrances.

This map uses the same underlying data as the Proximity to Publicly Accessible Parks and Natural Areas Composite Heatmap, but instead of showing the data as a heatmap, it aggregates the data by neighborhood. The darker the neighborhood, the higher its proximity score.

This maps layers the census tracts with percentages of youth that are above the regional average on top of the Proximity to Publicly Accessible Parks map.

To go back to the Parks & Natural Areas Series page, click here