For the region’s lowest income residents, living near a grocery store or supermarket does not necessarily translate into access to food due to the cost of buying food and other basic necessities. Many residents rely on sources of supplemental nutrition, such as food pantries, school-based summer meal sites, and SNAP (Supplemental Nutrition Assistance Program, also known as food stamps). 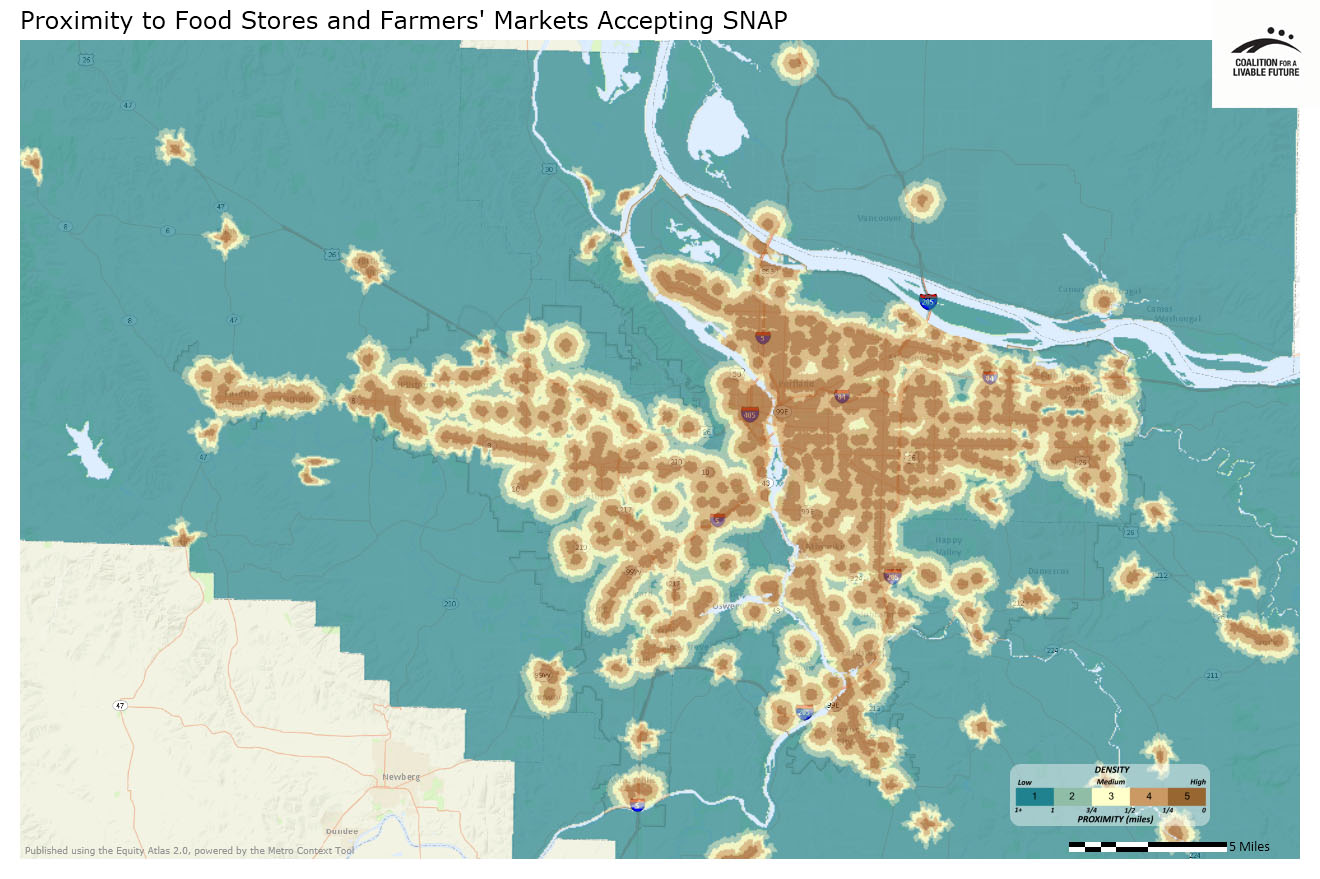 The neighborhoods with the highest scores in the Proximity to Supplemental Food Programs (Food Pantries and Summer Food Sites) map tend to be located in the more urban and densely populated areas of the region. The Atlas mapping tool can be used to assign a proximity score to every neighborhood in the region based on the average proximity of each block in the neighborhood to a supplemental food program. A score of “5” indicates proximities within ¼ mile, while a score of “1” or below indicates proximities greater than 1 mile. Of the ten neighborhoods with the highest proximities to supplemental food programs, most are located in north/northeast Portland, primarily in historically high poverty neighborhoods:

Many of the neighborhoods with the highest proximity scores on the Proximity to Food Stores and Farmers’ Markets Accepting SNAP map also have high proximity scores on the Proximity to Supermarkets, Grocery Stores, and Fresh Food Composite map. This suggests that SNAP acceptance is fairly widespread among food retailers in the region. The ten neighborhoods in the region with the highest proximity to food retailers accepting SNAP are:

The neighborhoods with the lowest proximities to food retailers accepting SNAP tend to be located in unincorporated areas and neighborhoods that are not densely populated. Neighborhoods in Clark County should not be analyzed using this indicator, because the data source did not include Clark County grocery stores.

Several census tracts in Vancouver and one in Forest Grove have high poverty levels and very low proximity to supplemental food sources. Further analysis of these and other census tracts with similar patterns could help to inform efforts to address food insecurity in our region.

The Atlas online mapping tool provides additional data that can be combined with these maps to develop a more complete understanding of how well specific populations can access supplemental nutrition. The locations of supplemental nutrition programs can be overlaid with demographic data on populations in poverty, seniors, children, and people of color to assess levels of geographic access. These maps can also be considered alongside Atlas maps showing the locations of grocery stores and farmers’ markets that accept WIC (Supplemental Nutrition Program for Women, Infants, and Children).

This map shows proximity to food pantries and summer food programs around the region.

This map shows proximity to grocery stores and farmers’ markets that accept payment via Supplemental Nutrition Assistance Program benefits (formerly known as food stamps). It does not include data on grocery stores in Clark County.

This map layers the census tracts with populations in poverty above the regional average on top of a composite map that combines the Proximity to Supplemental Food Programs (Food Pantries and Summer Food Sites) and the Proximity to Food Stores and Farmers’ Markets Accepting SNAP maps.

To go back to the Food Series page, click here