A fundamental prerequisite for an equitable society is that all children have access to a quality education.

The Atlas includes a range of maps that depict the quality of educational offerings at the region’s schools. This map series begins our examination of quality education with some basic data about the region’s schools. The first map shows proximity to the nearest elementary school, which gives an indication of school walkability as well as geographic access to neighborhood schools. The second map shows the percentage of minority students by school. The third map shows the percentage of students at each school who are eligible for free or reduced price lunch, which serves as a proxy for poverty. 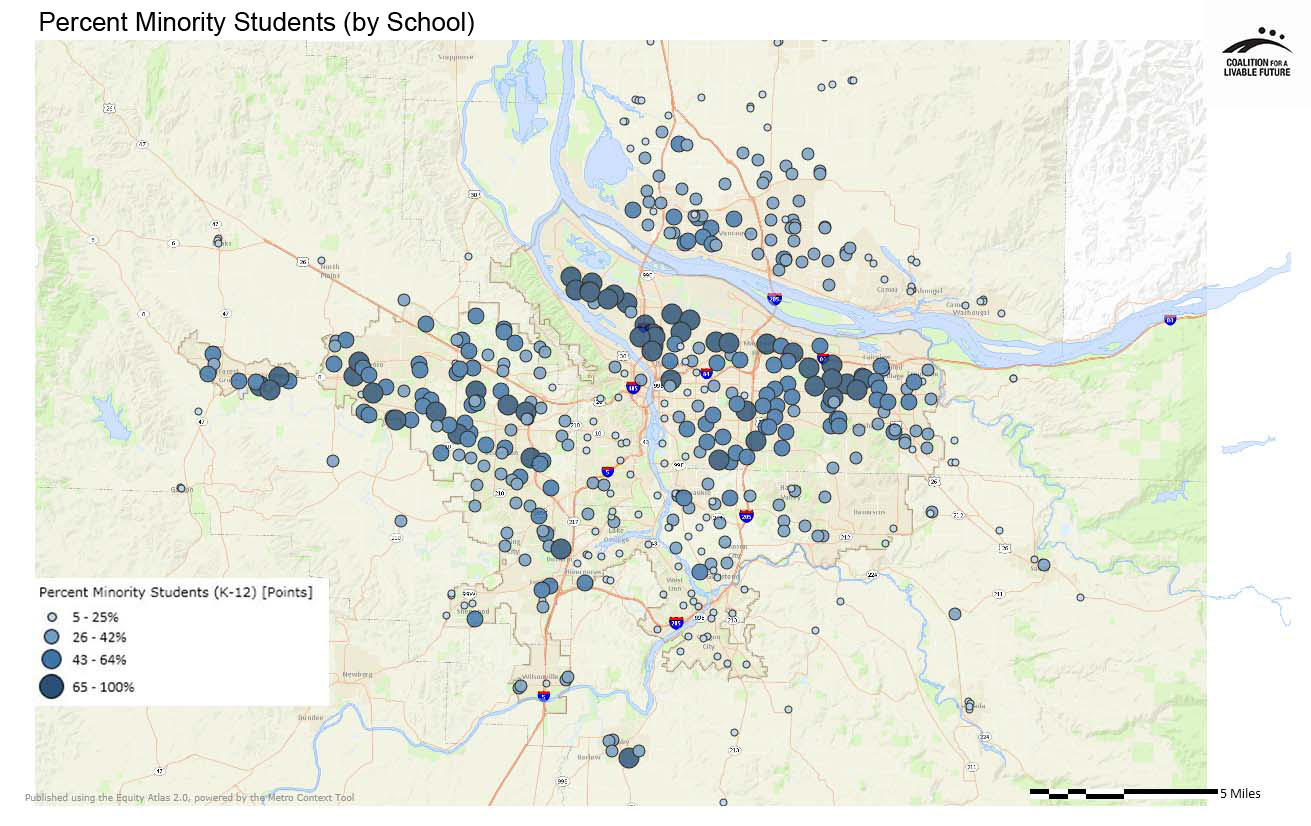 The ten neighborhoods with the lowest proximity scores to nearby elementary schools tend to be characterized by primarily industrial, non-residential urban form and land use. Six of these neighborhoods are located in Vancouver, and the remaining four are commercial or industrial areas of Portland:

The Percent Minority Students (by School) map shows the relative percentage of students of color in each of the region’s public schools. Of the ten schools in the region with the highest percentages of minority students, seven are located in the city of Portland, primarily in north and northeast. The remaining three schools are located in the Washington County cities of Cornelius, Hillsboro and Beaverton:

The ten schools in the region with the lowest percentages of minority students are scattered throughout Clackamas and Clark counties, often in more rural areas. Two charter schools in the West Linn / Oregon City area are also on the list:

The ten schools with the lowest percentages of students eligible for free or reduced price lunch are located primarily in Portland’s west hills neighborhoods, Lake Oswego, and Sherwood.

This map shows the walking distance to the nearest elementary school. The data include public schools and schools with special status (charter and alternative schools), but generally do not include private schools.

This map depicts the percentage of students per school that are identified in State Department of Education records as Hispanic, African-American, Asian, Native American, Other, and more than one race. These data have been provided by all public schools and schools with special status (charter and alternative schools), but generally do not include private schools.

This map shows the percentage of K-12 students identified as eligible for the free and reduced price lunch program, by school, for the 2011-2012 academic year. This indicator is often used as a proxy for childhood poverty.

To go back to the Education Series page, click here