Access to affordable housing is a fundamental building block for a successful life. The geographic distribution of affordable housing has a direct effect on residents’ ability to access all of the resources and opportunities that are essential for meeting basic needs and achieving health and well being. For these reasons, understanding the “geography of opportunity” related to housing is essential to any analysis of equity issues in the region.

This map series looks at housing affordability from several angles. It includes maps on (a) median home value, (b) change in median home value, (c) median rental cost, (d) housing purchasing power, (e) the housing plus transportation cost burden, and (f) the location of publicly subsidized affordable housing in relationship to areas with above the regional average percentage of populations in poverty. 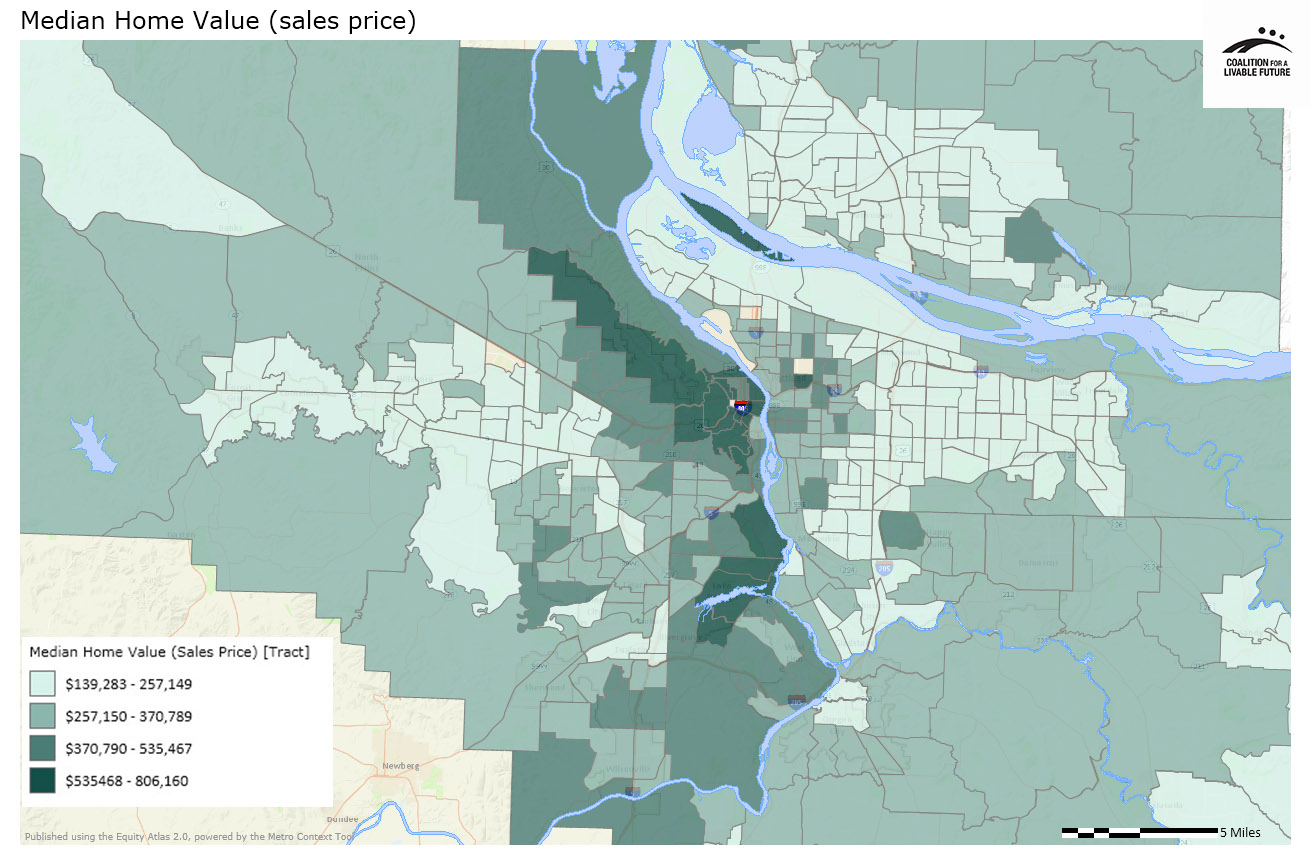 Census tracts where the median inflation-adjust housing sales price was lower in 2010 than in 2000 include a few neighborhoods in outer east Portland and east Multnomah County and a census tract that includes portions of Forest Grove and adjacent unincorporated Washington County.

These data do not fully capture the volatility of housing prices over the past decade. Prices rose rapidly in the early part of the decade and then dropped toward the latter part of the decade. Prices are now beginning to gradually increase again. The Change in Median Home Value map compares sales price data on homes sold in the year 2000 and 2010, so it reflects two snapshots in time rather than the trends over the course of the entire decade.

The Median Rental Cost map provides data on rental housing; unfortunately these data are only available by zip code, so the map does not provide as nuanced an analysis as the other maps in this series. It is also important to note that the data used for this map are taken from a relatively small sample of units, and the units included may or may not be representative of the full range of rental housing in the region.

The zip codes with the highest rents in the region include Lake Oswego, downtown Portland and the adjacent Southwest Hills, Pearl and Old Town neighborhoods. Median monthly rents ranged from $1,150 to $1,580 in these areas in 2011 for a two-bedroom unit. The inclusion of Lake Oswego, the Southwest Hills, and the Pearl District among the region’s highest rent neighborhoods is not too surprising. The inclusion of downtown Portland and Old Town is more surprising, since the region’s highest poverty census tract overlaps with both of these neighborhoods.

There are several potential reasons why an area would not be affordable to current residents. This divergence might be explained by housing values rising more rapidly than the residents’ incomes (raising potential future gentrification concerns), by the fact that a large share of households are renters who are unable to afford to purchase homes, by an influx of lower-income households into a historically moderate income neighborhood (raising potential concerns of disinvestment), or by other factors. Looking at this map in conjunction with some of the other Atlas maps may provide additional insights into the mismatch between housing values and the purchasing power of existing residents in these areas.

For many years, housing has been considered to be affordable if it costs no more than 28% to 35% of household income. More recently, analysts have begun to consider the affordability of housing and transportation costs jointly because housing and transportation are usually a household’s two largest expenses, and households often make tradeoffs between the two. For example, a household may choose to live in a more expensive apartment because it is more convenient to destinations that they frequent regularly, such as work. Other households may choose to live in a less expensive housing location but pay more for transportation costs because the home is farther away from frequent destinations.

The map Location of Publicly Subsidized Affordable Housing in Relationship to Areas with Above Regional Average Percent Populations in Poverty depicts the locations of housing units that have received public funding in order to maintain rents that are affordable to households that cannot afford market rents. The map shows that nearly all of the region’s publicly subsidized housing units are located in areas where the poverty rate is above the regional average of 6.72%. This suggests a general alignment between the locations of affordable housing units and the people who are in need of that housing. But it also suggests that many affordable housing units may be located in areas of lower opportunity, since high poverty neighborhoods frequently have reduced access to opportunity. It is important to note that this map does not include information about where people live who use subsidized housing vouchers to help pay for market rate housing units.

Housing affordability plays a central role in equity issues related to access to opportunity. Where people live has an effect on their day-do-day lives, their access to jobs, quality education, and a healthy environment, and their social networks. Housing patterns that separate low income households or people of color from access to opportunity pose major equity issues. Housing affordability—the share of income that people pay for household costs—also affects the degree to which residents have sufficient resources to take care of life’s other necessities.  The maps in this series help set the stage for further equity discussions of the region’s housing, transportation and land use policies.

This map shows the median home value by census tract based on the recorded sales prices of owner-occupied single family homes on less than 10 acres.

This map shows the census tracts with above regional average percent populations in poverty overlaid with the location of housing units that are made affordable through public subsidies and/or agreements or statutory regulations that restrict or limit resident income levels and/or rents. Publicly-subsidized (also referred to as "regulated") affordable housing generally provides housing for households that otherwise could not afford adequate housing at market rates. The map does not include non-regulated (i.e. private market) housing units that provide housing that is affordable to low-income residents. The data also do not include the locations of households using publicly subsidized vouchers rent private market housing units.