Home ownership is a key source of asset building for many American households. Owning a home can also contribute to greater housing stability and an improved quality of life. But home ownership is beyond the reach of many lower-income households because of the substantial cash assets required in order to secure a home loan. The legacy of historic and in­stitutionalized racial discrimination also contributes to racial disparities in access to mortgage lending. For these reasons, access to home loans is an important regional equity issue.

The next set of maps looks at home loan denial rates for white and non-white applicants. Loans can be denied for a wide range of reasons, so these maps do not necessarily provide any direct insights into racial discrimination in lending. But they do offer an additional lens for analyzing potential patterns of racial disparities in access to home loans.

The final map in the series explores patterns in foreclosure rates. FHA loans offer one path to home ownership for lower income households. Over the past decade, sub-prime loans have offered another path. These loans typically have high interest rates, balloon payments, or adjustable rates. Regardless of the loan type, lower-income households often struggle to maintain their home loans because they typically spend a relatively high portion of their income on housing. Loss of employment, a health crisis, or other changes in household finances can make it impossible for households to meet their loan terms, leading to foreclosure.  But foreclosure doesn’t just affect low-income households or those with sub-prime loans. The foreclosure crisis has also affected many higher income households. While this map does not enable us to disentangle all of these factors, it offers some interesting insights into foreclosure patterns in the region. 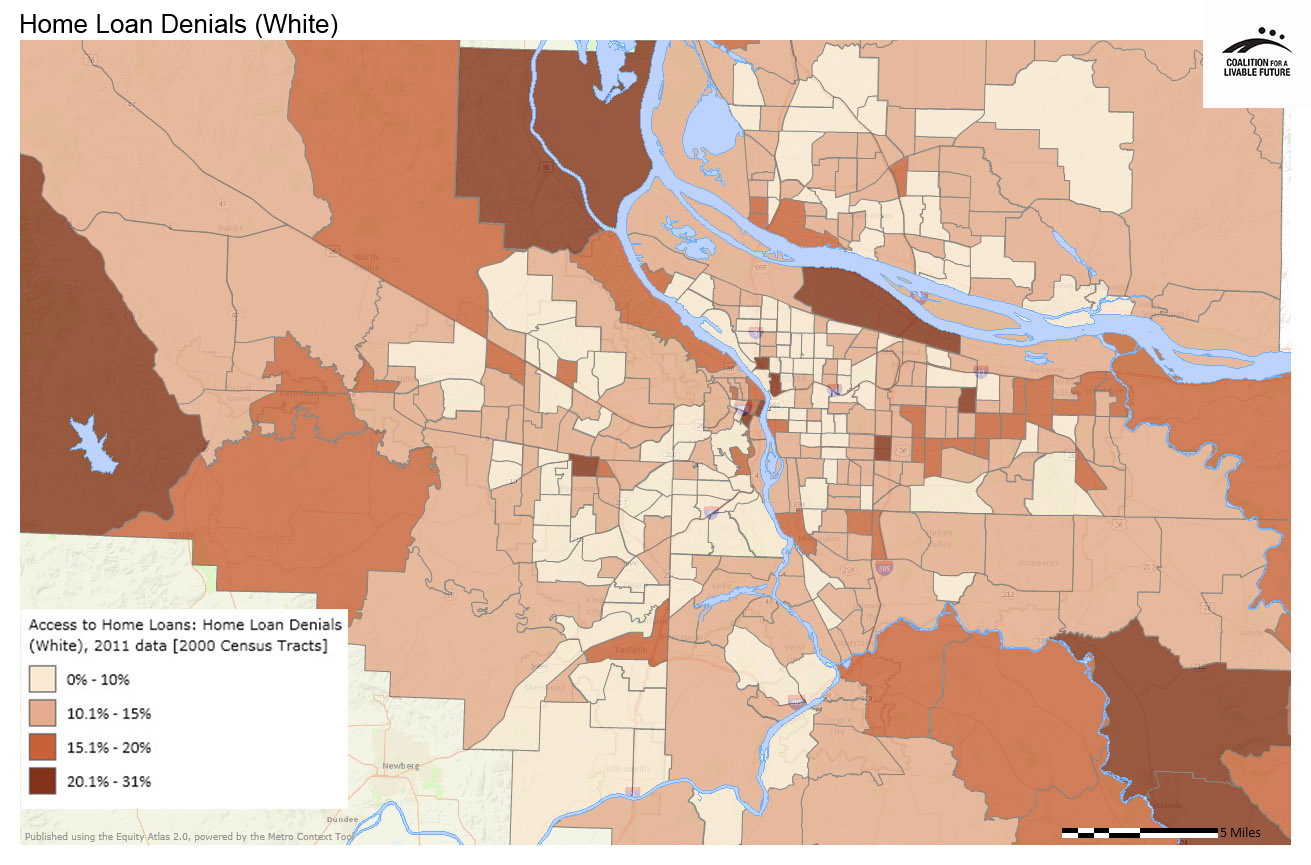 Number of Applications for FHA Loans

Number of Applications for Conventional Loans

Analyzing access to home loans is complex, but the spatial distributions depicted in the Number of Applicants for FHA Loans and Number of Applicants for Conventional Loans maps are striking. If we compare the patterns to the Atlas’ income maps, we find that the applications for FHA loans tend to be concentrated in areas with lower median incomes, while the applications for conven­tional loans tend to be concentrated in areas with higher incomes. The census tracts with the highest numbers of applications for FHA loans are in a ring outside of the region’s urban core in census tracts located in and adjacent to cities such as Gresham, Sandy, Happy Valley, Oregon City, Camas, and portions of Vancouver, Hillsboro, Beaverton, Forest Grove, Sherwood, and Tualatin. The census tracts with the lowest numbers of FHA loans are in Portland’s northwest, southwest and inner east sides, Lake Oswego, and unincorporated areas of all four counties.

Looking at the geographic distribution of home loan denials, the rate of denials to white applicants appears to be relatively low in many of the region’s higher income areas. This includes many of Portland’s west and inner east side neighborhoods, and parts of Lake Oswego, West Linn, Wilsonville, Sherwood, Tigard, Beaverton, and Hillsboro. The highest rates of denial to white applicants tend to be in a few large census tracts on the periphery of the region as well as a few small census tracts located in areas closer to the urban core.

The Foreclosures (Percent Notice of Transfer Sale) map shows the highest rates of foreclosures in zip codes located in a ring around the urban core. This includes zip codes in and adjacent to Hillsboro, Tigard, Oregon City, parts of north and outer east Portland, Gresham, and an area on the northeast edge of Vancouver. As with the home loan denial maps, there are many potential reasons why a home may go into foreclosure. Further analysis of the foreclosures in these hotspots would be necessary in order to fully understand these patterns.

Number of Applications for FHA Loans

This map shows the total number of FHA loan applications in 2011, mapped by 2000 census tract. FHA loans are only available to populations meeting the eligibility requirements, which disproportionately favor first-time homebuyers, those who can only afford a small down payment, and those with poor credit ratings.

These data were provided because of the HMDA (Home Mortgage Disclosure Act), which requires lending institutions to report public loan data. This map compiles data from the LAR reports (Loan Application Register), which record information on the type of loan application, race and ethnicity of applicants (using standard census race/ethnicity categories) and status of application loan (e.g. approved or denied). The data do not capture information on people who may not have applied for a loan to begin with because of economic or other barriers or the perception that they would be denied.

Number of Applications for Conventional Loans

This map shows the total number of conventional loan applications in 2011, mapped by 2000 census tract. Conventional loans tend to require a higher amount of money for a down payment, adequate income levels to pay for the loan, and a minimum credit score.

This map shows the total number of home loan denials to non-white applicants in 2011, mapped by 2000 census tract for FHA, conventional, and other types of home loans. Loan denial information is based on Loan Application Register reports and does not provide adequate information on the reasons for the loan denial.

This map shows the total number of home loan denials to white applicants in 2011, mapped by 2000 census tract for FHA, conventional, and other types of home loans.