Cardiovascular disease — a category of diseases affecting the heart and blood vessels, including heart disease and stroke — causes more deaths in Americans than any other disease and is also one of the leading causes of disability in the United States. National research indicates that low-income populations and populations of color bear a disproportionate burden of both death and disability from cardiovascular disease, and it is a major contributor to differences in life expectancy among racial and ethnic groups. Cardiovascular disease is also significantly impacted by lifestyle and behavior choices -- such as rates of physical activity and healthy eating -- that are shaped by the built and natural environment. 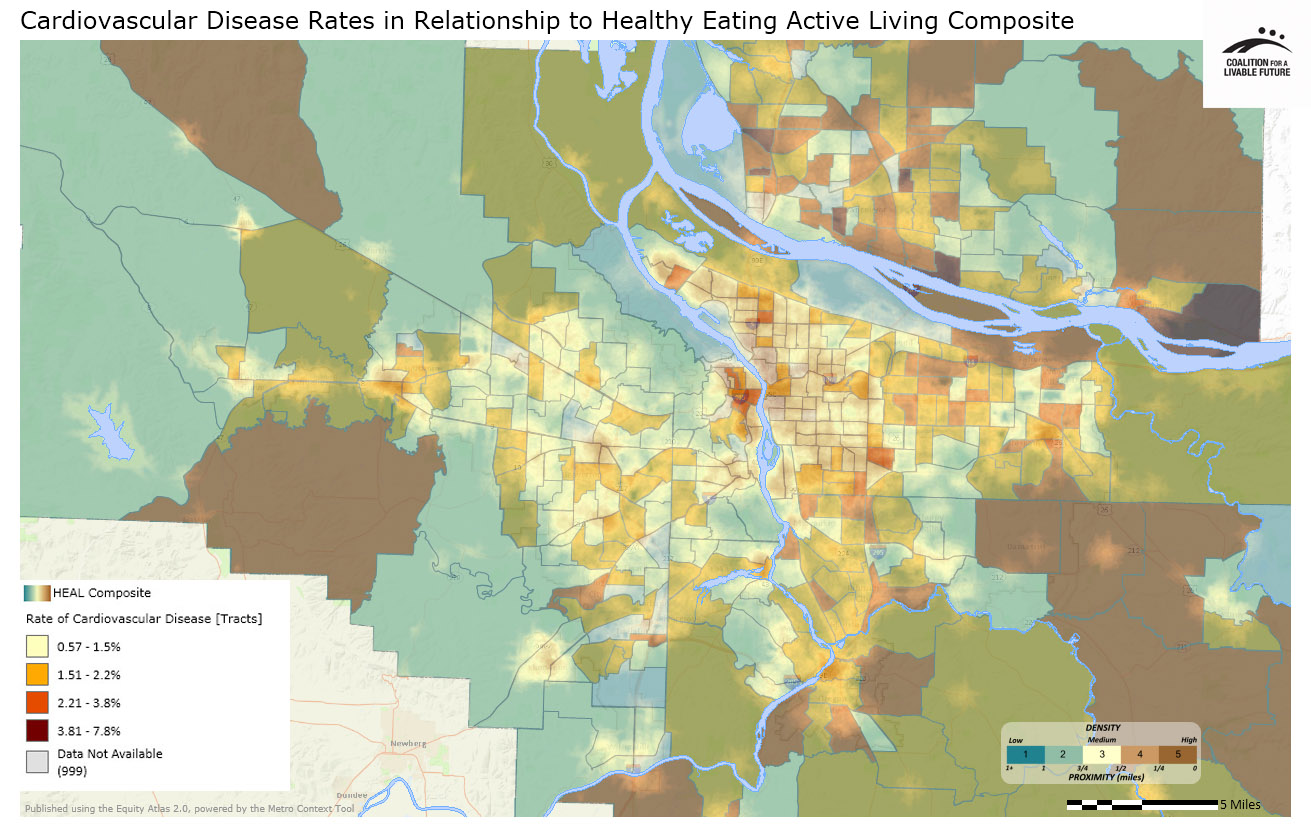 Cardiovascular Disease Rates in Relationship to Populations of Color

Note: Although the Cardiovascular Disease Rates map includes data for some Clark County census tracts, these data should be interpreted with caution. The map is based on data submitted to the Oregon Health Care Quality Corporation, which collects insurance claims data for health plans operating in Oregon. Some of the participating health plans submit claims data for members living in Clark County, but many do not. For this reason, the Clark County data are based on a limited population of Clark County residents and may not be representative of the entire population. The analysis of the maps in this series will therefore focus only on the portions of the region located in Oregon.

This map is based on data provided by the Oregon Health Care Quality Corporation. It depicts participating insurance plan members, ages 18-75, who were identified as having a cardiovascular condition. These data include administrative claims (billing) data from eight commercial health plans, two Medicaid managed care plans and the Oregon Health Authority Division of Medical Assistance Programs (Medicaid). The data for this indicator come from health insurance claims records, so they do not include data on uninsured patients, patients who pay for their own health care services, Medicare fee-for-service patients, or patients served by a plan or Medicaid provider that does not supply data to the Oregon Health Care Quality Corporation. The data, therefore, do not represent all persons living within a census tract. The data were first geocoded by patient address and then aggregated into census tracts in order to maintain confidentiality.

Cardiovascular Disease Rates in Relationship to Populations of Color

This map layers the Populations of Color (Density by Acre) map with the Cardiovascular Disease Rates map.