Asthma is a potentially debilitating chronic disease that affects the long-term health and well-being of both adults and children. Research has shown significant racial/ ethnic and income disparities in asthma rates, with populations of color and people in poverty experiencing consistently higher asthma prevalence rates and poor asthma outcomes compared with the general population. For this reason, asthma is a particularly important health equity indicator.

Asthma is a chronic disease affecting the air passages leading to and from the lungs. It is characterized by recurrent attacks of breathlessness and wheezing, which can result in fatigue and lifelong restrictions in activity levels. According to the World Health Organization, the strongest risk factors for developing asthma are a combination of genetic predisposition and environmental exposure to inhaled substances and particles such as air pollution and chemical irritants.

This map series shows asthma rates for the region, mapped by patient address aggregated to the census tract. It also includes maps showing how asthma patterns compare with demographic patterns and with the locations of common sources of air pollution – freeways and major arterial streets. 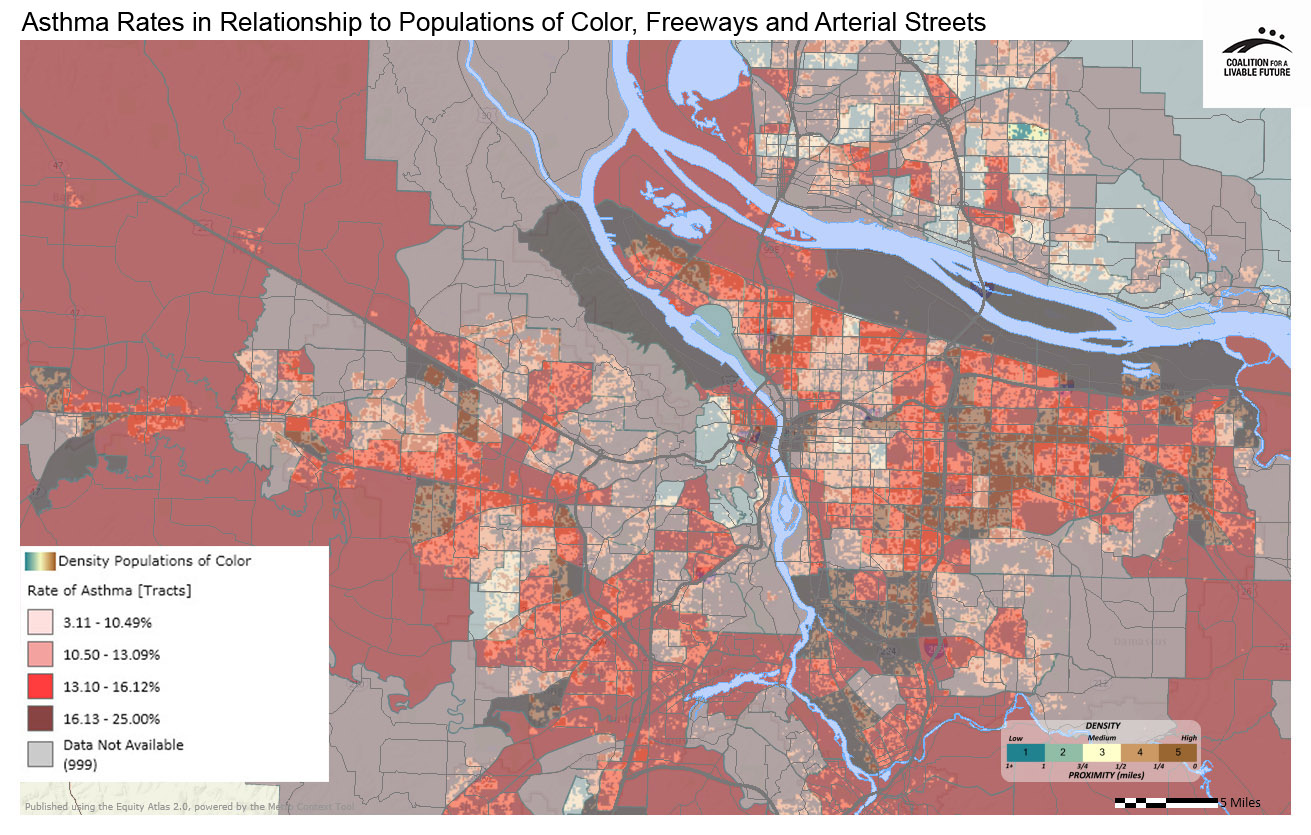 Asthma Rates in Relationship to Populations of Color, Freeways and Arterial Streets

Note: Although the Asthma Rates map includes data for some Clark County census tracts, these data should be interpreted with caution. The map is based on insurance claims records reported to the Oregon Health Care Quality Corporation, which collects insurance claims data for health plans operating in Oregon. Some of the participating health plans submit claims data for members living in Clark County, but many do not. For this reason the Clark County data are based on a limited population of Clark County residents and may not be representative of the entire population. The analysis of the maps in this series will therefore focus only on the portions of the region located in Oregon.

The Asthma Rates in Relationship to Percent Students Eligible for Free or Reduced Price Lunch, Freeways and Arterial Streets map explores the relationship between asthma rates and poverty as well as the relationship between asthma rates and the locations of major sources of air pollution from vehicle emissions. In some parts of the region, census tracts with higher rates of asthma tend to be located along freeways, but this pattern is not found consistently across the region. For example, in Multnomah County, higher rates of asthma are located along parts of I-5, particularly in north Portland, and along I-84 and I-205. But in Washington County, some of the lowest asthma rates are found in census tracts along US-26. This inconsistency suggests that while proximity to freeways may influence asthma rates, it is not the only determining factor.

The Asthma Rates in Relationship to Populations of Color, Freeways and Arterial Streets map shows a similar relationship between asthma rates and race. Across the region, the areas with the highest densities of populations of color also tend to have higher asthma rates. This pattern isn’t uniform, but it is fairly consistent across the Oregon portions of the region. One of the most visible exceptions to this pattern is in a few areas in and adjacent to Hillsboro, Beaverton, and Happy Valley, where there are high densities of populations of color in census tracts with relatively low asthma rates.

The patterns in this map series are consistent with national data showing racial and income disparities in asthma rates. Given the significant impact that asthma can have on the immediate and long-term health and quality of life of both children and adults, these disparities are an important health equity issue that our region will need to address.

This map is based on data provided by the Oregon Health Care Quality Corporation. It depicts participating insurance plan members, ages 5-50, identified as having asthma in 2011 or 2010, based on information taken from insurance and pharmacy claims records. These data include administrative claims (billing) data from eight commercial health plans, two Medicaid managed care plans and the Oregon Health Authority Division of Medical Assistance Programs (Medicaid). The data for this indicator come from health insurance claims records, so they do not include data on uninsured patients, patients who pay for their own health care services, Medicare fee-for-service patients, or patients served by a plan or Medicaid provider that does not supply data to Oregon Health Care Quality Corporation. The data, therefore, do not represent all persons living within a census tract. The data were first geocoded by patient address and then aggregated into census tracts in order to maintain confidentiality.

Asthma Rates in Relationship to Populations of Color, Freeways and Arterial Streets

This map layers the census tracts with populations of color above the regional average on top of the Asthma Rates map, also highlighting freeways and arterial streets in the region.