The health of mothers to be has a significant impact on the well-being of the next generation, and is therefore a central public health issue. Numerous research studies have shown the fundamental importance of early prenatal care to the long-term health of both mothers and their children. Inadequate prenatal care can contribute to nutritional deficiencies and long-term health problems. According to the U.S. Department of Health and Human Services, babies born to mothers who received no prenatal care are three times more likely to be born at low birth weight and five times more likely to die than those whose mothers received prenatal care.

Whether mothers receive prenatal care is determined by a wide range of factors. Two key factors are access to appropriate medical care and the mother’s ability to afford care. Data on the rate of first trimester prenatal care can therefore serve as a reasonable proxy for measuring access to medical care. And because of the central importance of early prenatal care to the health of the mother and child, these data can also provide insights into likely disparities in the future health of the infant and the mother.

This map series uses state vital records data to map the percentage of babies born between 2006 and 2010 whose mothers received first trimester prenatal care. The map focuses on the rate of prenatal care but does not capture other key factors such as the frequency of care, total number of visits, quality of care, and whether care continued past the first trimester. 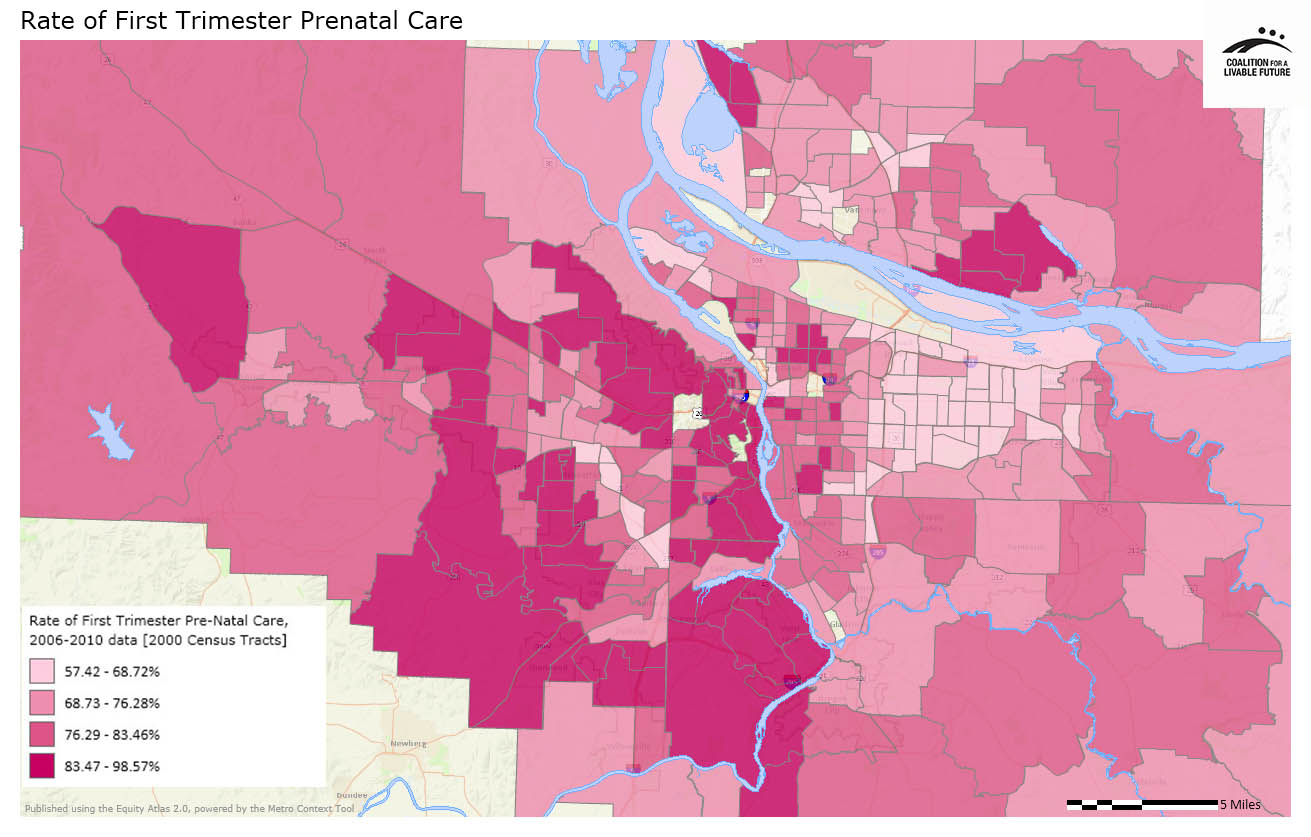 The Rate of First Trimester Prenatal Care map shows some striking patterns. Most notably, the census tracts with the highest rates of first trimester prenatal care (83%-99%) are primarily located in the western half of the region, in large swaths of Washington County and the western portions of Multnomah and Clackamas Counties.

There are a few notable exceptions to this pattern. These include several census tracts in Clark County, including two in the Felida and West Hazel Dell neighborhoods, and several located in the City of Camas and on the eastern edge of Vancouver. A few census tracts with high rates of prenatal care are also clustered in several inner northeast and southeast Portland neighborhoods, including Alameda, Irvington, Beaumont-Wilshire, and Grant Park in the northeast, and Buckman, Hosford-Abernathy, Mt. Tabor, Woodstock, and Eastmoreland in the southeast.

Several census tracts across the region appear as white or clear on the map because sufficient data were not available to permit the rate of prenatal care to be accurately mapped for those census tracts.

The patterns in this map raise a number of important questions regarding equitable access to prenatal care. Some of the patterns appear to align with jurisdictional boundaries, suggesting that the availability of prenatal care, particularly for low-income and uninsured mothers, may vary by jurisdiction. If this is true, it offers potential opportunities to improve equitable access to prenatal care across the region by improving the availability of publicly-funded care in those jurisdictions with low prenatal care rates. But some of the most striking variations are between census tracts located in the same jurisdictions, often in close proximity to one another. Those variations are more likely to be correlated with the socio-economic characteristics of each census tract. Investigation of these potential correlations may help to illuminate broader patterns of health disparities across the region.